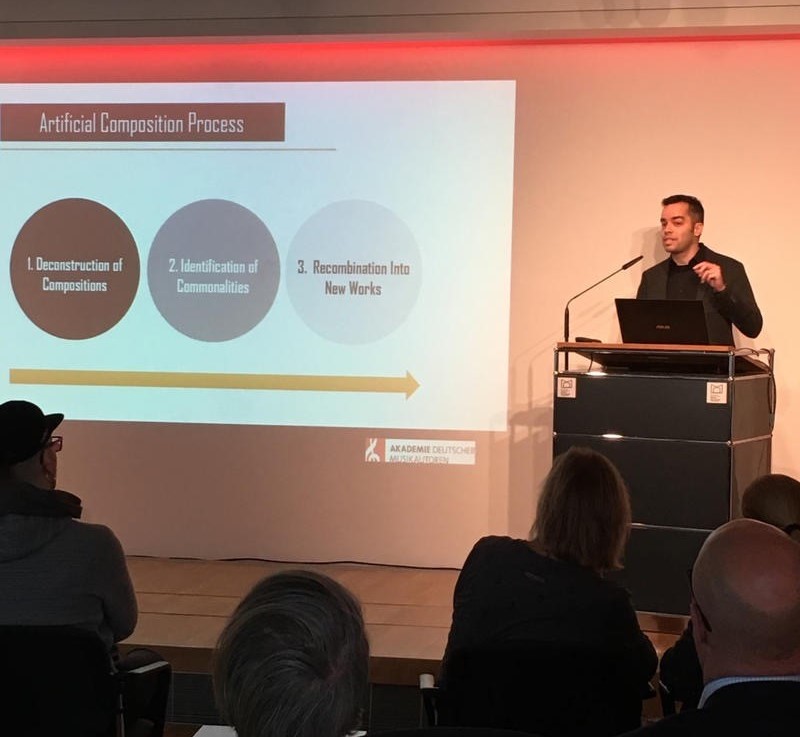 In the last months of 2018 I was invited to be one the speakers during the “2019 Deutscher Musikautorenpreis” in Berlin, at the Sony Center.

It was a true honor and privilege.

The event is organized by GEMA (Gesellschaft für musikalische Aufführungs und mechanische Vervielfältigungsrechte) a society responsible for collecting, preserving and defending the rights of music composers in Germany. And event the is one of the most prestigious of the German music industry.

The session I was invited to had as main topic “Artificial Creativity and Music”. A timely and controversial theme.

The session took place in Mid-March 2019 at the Sony Center in Potsdamer Platz (Berlin). During my talk, I debated the origins of artificially composed music and generally how it works, companies that are currently developing algorithms to compose music, my research findings and what the future holds for the music industry.

Following this, there was a fantastic discussion about #AI, #creativity and #music with Pierre Barreau, Dr. Ralf Weigand, Barbara Morgenstern and Gudrun Gut for an audience of classical composers, musicians and other industry stakeholders.

How Was the Reaction?

It is really hard to describe how fascinating it was. Given the topic of discussion and the audience, all emotions could be felt and seen. They ranged from amazement to frustration; from curiosity to disappointment.

After all, to debate a new technology which can replace humans, especially for an audience that is directly impacted, is challenging to say the least.

But also gave me the certainty that I was witnessing an important moment in time.

I witnessed another historical moment where humans had conflicting views towards a societal change based on a new technological disruption. Exactly as it happened during the passage from the agricultural revolution to the industrial era and later to the digital revolution.

The difference is that now we are witnessing a much more impactful change: we have entered the autonomous revolution.

All revolutions are based on one main element: the optimization of processes (mostly related to production). And optimization induces simplification and exclusion. There are always the ones left behind, as they are no longer needed.

The difference this time is that regardless of one’s capacity and years of experience, algorithms are simply capable of performing more and better. In our case of the event, AI can compose a much greater amount of music and with an ever increasing quality. The comparisons of economies scale are simply not fair to humans.

Exactly for this reason, the reactions to the topics were mixed. There were times of surprise, others of apprehension and also disappointment. And a few of genuine curiosity.

One of the most interesting questions I was asked was from a German classical composer (I will omit the name) that at the time was working a new composition for a 69 piece orchestra: “Creativity has always been intrinsically related to my idea of self. It is who I believe I am. What should I do if this trait becomes no longer relevant?“

What a deep and extraordinary question.

Her concern is genuine, honest and shared.

Taxi drivers, scientists, financial analysts, factory workers and many others have similar doubts: Who will I be if what I think I am and do is no longer required?

More than ever before in history, in the near future humans will need to reinvent themselves and their identities. Not just musicians. And this represents perhaps one the main challenges we will face in the coming decades.

All extremely valuable points that require much further discussion and research.

During the event I also had the opportunity and the please to meet and chat with Pierre Barreau, founder of AIVA Technologies.

Pierre was also one of the key speakers and is the main person responsible for making AIVA one of the main companies producing music through algorithms in the world.

Soon I will visit their base in Luxemburg.

It was a day to remember and perhaps the reason why I am writing about it after a few months. I needed time to zoom out, reflect and digest it all. The world is changing, society is slowly reshaping itself, and the process is speeding up.

The autonomous revolution will require deep societal adjustments and global participation in how to reinsert humans on the workplace and in how to reinvent and restore our definitions of self. But also, we will need fast solutions on how to deal with the frustrations of a new life where old skills and passions are no longer required or simply less valued.

Are we ready for the future?